This year’s conference began with an excellent, thought-provoking presentation by Andrew Theising on how local real-estate intrigue has kept the East St. Louis waterfront undeveloped. However, the conference as a whole offered little about the reality — or the work to be done — on the ground. 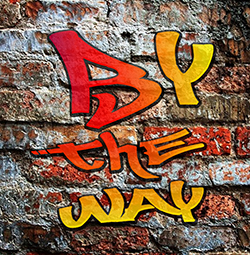 That’s not a complaint; the ’17 conference had different goals. Yet we were in [the] St. Louis [area], and that is one of the 21st century’s most famously distressed and troubled cities. Indeed, our pleasant, commodious hotel, across the road from a field of soybeans, served as a poignant illustration of the problem. The CGO originally looked at a hotel in downtown St. Louis, but that place turned out to be too uncomfortably beset with urban problems (such as homeless folk availing themselves of its air-conditioned lobby) to suit our paying customers.

To get to the better hotel, we had to travel some 24 miles. I took the Metrolink light rail from the airport. I purchased a ticket from a scalper, who was reaping, perhaps, 50¢ per sale, and business didn’t seem brisk. We went past Ferguson, with its Florissant Avenue, the thoroughfare where heavily-armed police clashed with the founders of the Black Lives Matter movement. Two 40-something Walmart workers, one black and one white, both with bad teeth, were happily heading home with one of their daughters. They got off well before the train reached Busch Stadium, the Gateway Arch and the Dred Scott Museum. It then crossed the Mississippi into the dystopian tableau that is East St. Louis. I thought of James Baldwin writing, “I marveled at how a city with, after all, no unconquerable physical handicaps could nevertheless be so relentlessly uninhabitable.”

It turned out that my ticket didn’t qualify me for a free transfer to the bus (hence the discount). But, I was the only passenger on the bus that afternoon, and the perky, charming young woman driving it waved off my attempt to pay. The last eight miles of my trip to the hotel were on bloated, crowded, four-lane suburban roads. The bus stopped at a large, sparsely-attended shopping mall for ten minutes; nobody got on (later, two ladies with shopping bags got on for a short hop).

It can’t just be a matter of people leaving the area. The city of St. Louis has lost population, of course. But people are living in the miles and miles of creepy built-upness between the city and O’Fallon, Illinois (with its conference centers and soybeans). No doubt fewer of them own their homes than a decade ago; on my journey I passed a great many payday-loan emporia, pawn shops and liquor stores, and saw many signs offering car-title loans. Perhaps I seem more shocked at all this than I ought to be; that’s a fair observation. I live in a place that still has New England-style Town Meetings, where people still don’t lock their houses. There is poverty, to be sure, but the local high school is still a focus of community pride. People who live in the country, or in somewhat-functional cities, have troubles of their own — but they are insulated from the hideous realities of blight-and-sprawl. The train and bus ride from Lambert Airport to O’Fallon, Illinois puts it right in one’s face.

Al Katzenberger, St. Louis stalwart and longtime head of the public Revenue Education Council, made sure CGOers got a chance to encounter local reality by giving everyone a copy of a recent issue of Riverfront Times, which featured a long exposé of Nathan Cooper, a scroogy real estate operator. (The article is titled “Do Not Pass Go” and features Monopoly-game imagery.) Cooper’s method is to buy up foreclosed houses at public auctions, slap on as cheap a “renovation” as he can get away with, and rent out those houses to poor tenants. Many of these tenants receive Section 8 housing assistance, which means that the rent Cooper collects is subsidized by federal taxpayers. Cooper is just the local guy; no doubt there are as many versions of him, across the nation, as there are of that ambulance-chaser law firm (whose ads are very prominent on St. Louis-area billboards).

Cooper is well-known for renting to tenants that others won’t. His ad on gosection8.com proclaims “Criminal check? No. Credit check? No.” Furthermore, there is a shortage of larger houses for rent, so Cooper specializes in a niche market: poor families with many children. Such tenants are in no position to complain about the houses’ shoddy, often unsafe conditions. “We attempt to handle all tenant maintenance issues in an expeditious manner,” Cooper wrote, adding that “Much of the maintenance performed is caused by tenant abuse of the properties.” One such abuse: washing the walls. Tenants stop doing that when they discover it exposes chipping lead paint.

After a tax sale at which he’d picked up a couple of foreclosed properties at dirt-cheap prices, Cooper told a reporter, “The city is a horrible place to live, absolutely, the city is so messed up. And nobody wants to do anything to straighten it up, unfortunately… It’s sad.”

Ultimately, Georgists know how to fix these problems. I have to believe, though, that successful advocacy vitally depends on grasping the specifics of how “the land question” bears on everyday lives. That occurred to me, anyway, as I waited for the plane to take me back (coach, with a layover in Atlanta) to Waldo County, Maine. 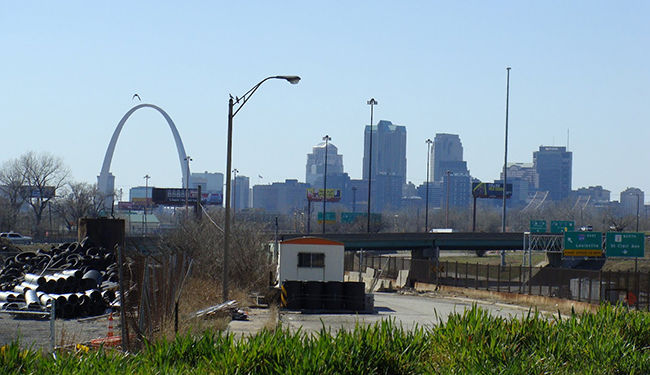 Looking across the Mississippi from East St. Louis